Churchill's Reaction to Eisenhower's Speech at the English Speaking Union 1951

I'm still reading Never Despair Winston S. Churchill  1945-1965 by Martin Gilbert.  It is a bible-sized book, albeit the print is slightly bigger, and it will take me a while yet.

Recently I've come across an interesting chapter.   This section of interesting stuff starts on Page 619.

Interesting to me, and those Brits and others on the EU side of the Brexit-argument, I've found more compelling evidence to answer the question:  "Would Winston Churchill have been in favour of Britain being in the EU?".   Of course, I believe the answer (certainly after the War) was that he would have been in favour.

Ike Eisenhower made a speech at the English Speaking Union Dinner on July 3, 1951.  Churchill was there.  Churchill didn't actually hear the speech well enough at the time, but read it's transcript the following day.  He was ecstatic when he did. 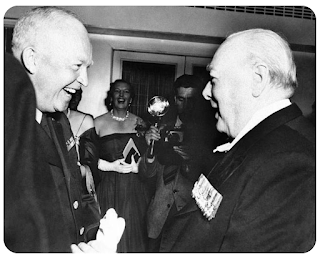 Eisenhower and Churchill
The relevant text, of the above mentioned book, is as follows;

"...So pleased was Churchill by Eisenhower's speech, when finally he read it, that on the morning on July 5 he instructed Conservative Central Office to make a hundred copies of it 'by noon tomorrow at the latest'... In sending a copy of Eisenhower's speech to Woolton, Churchill wrote...

'This is one of the greatest speeches that has been made by an American for many years. It was scarcely reported at all in the British Press... It seems to me it expresses the policy of our Party, and I trust our country, in the most complete and perfect manner

I ask you give directions for the immediate circulation of this speech in every constituency and through every form of organisation that you control. I wish several millions of copies shall be printed, and that it shall become apparent that this is our policy, purpose and plan.'"

So Mr Churchill was happy with the speech by his wartime friend Ike.  But what was the contents?  And how does this relate to Brexit?

I've dug deep on the Internet and found a copy of the speech printed by the New York Times.  I will reproduce some sections here.

1) President Eisenhower felt that a United Europe would be of benefit to NATO. 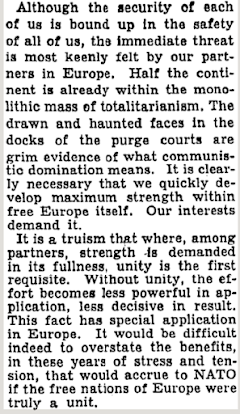 And he continues later in the speech... 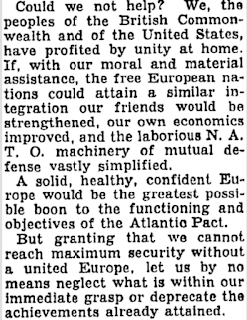 As one of the Architects of NATO, President Eisenhower had a clear vision that a United Europe was one it's key components.
This makes a nonsense of the claim, by Brexiteers, that it was NATO, not the EU that has kept the peace since 1945.
2) President Eisenhower could see, back then 1951, that erecting trade barriers was a problem.

"Hobbled by a web of customs barriers, interlaced with bilateral agreements..."   Do these terms not sound so modern?  This is exactly what the Conservative Brexit has brought us?  Churchill will be turning in his grave. 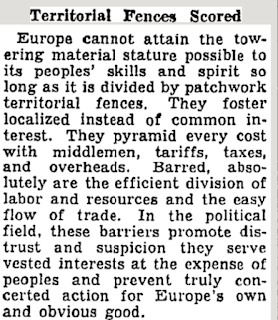 "Taking Control of our borders!"   How I doubt Ike or Winston would have liked to hear that phrase. With the exit of Britain from the Customs Union we now have again exactly what was being warned against here.  "They pyramid every cost with middlemen, tariffs, taxes and overheads."
With this speech in his recent memory Churchill went on to himself give a speech a couple of weeks later at Mansion House, on 23rd July 1951.
The speech was in support of a United Europe and a European Army.  Churchill commented:
"...That I saw the representatives of the German Parliament take their seats in the European Assembly at Strasbourg'.  The European Movement and the European idea for which it stood had, he said, 'undoubtedly played a large part in bring the reconciliation of these two foes whose quarrels through the centuries have wrought on them and all of us grievous injuries...'
Incredibly then he goes to to spell it out in the most clear terms his feelings:
"...He was sorry that the British Government [Labour] had refused an invitation to join in the Paris talks on the Schuman Plan.  'I believe that if a British Representative had been there', he said, 'we might have very likely secured further modification which would have made it possible for Britain to join in this scheme, either on the same footing as the others, or as some kind of associate member...'"
So Churchill said he would have liked to join in the scheme.  How can any Brexiteer still claim that he would not?
brexit churchill europe export