Why we will be back in Europe and surprisingly quick

- January 31, 2020
1) Take away Brexit Boris, and all you have are "swivel-eyed-loons".  Think about it - who is in any way "normal" in the current Brexit party - sorry Conservative Brexit Party? 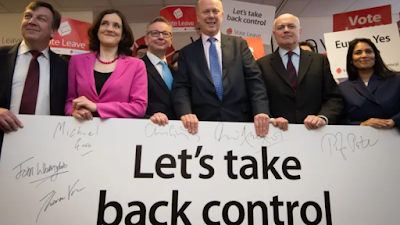 I mean look at them.  What a bunch of awkward misfits...   And in the ranks... all those odious backbenchers like Mogg, Baker, Jekin, Cash, Redwood, Bridgen & Francois.

It was Boris what won it.   And Boris is going to come seriously unstuck....   Either he goes soft brexit, so then what was the point?  Or he goes hard, and boy it's going to be hard; and with it an economic hit.

You see the problem?  Boris has nailed the Conservative & Brexit party flag so hard to the "Outside Everything"-mast; that he can't possibly go back.

2) All the Labour party have to do it get someone vaguely presentable, certainly Starmer would be fine, or Nandy or Thornberry and propose a "EFTA"-like trading arrangement.  That's back in folks, and as far as we want to take it - certainly until Farage & Co are in the nursing home.  If there has been one tiny glimmer of light is that we won't have to bear the sight of that snake-oil salesman any longer in the EU Parliament.   Going back into the EU would mean him getting voted back in, so No Thank You.

ETFA means free trade - free movement - keeping the Pound (I'd prefer to dump, but whatever), and a low profile in Brussel.

It also means faster economic growth (you know.. no tariffs, market access lol), and Good Ol' Boris and Friends can't go anywhere near proposing *that*.   So the gift of anyone who wants to take it.

The thing is, that most "normal" MPs were remainers - that is, "grown ups" who understand this is not about Empire 2.0 but working together with the countries that are closest geographically to us... so it is only a matter of time that the slogan politics, into which have descended, gives ways to quiet sensible decisions.

I will leave the last word to these guys....  Thank you


A message to Europe, this morning on the White Cliffs of Dover. Sound on. pic.twitter.com/E3VY8BaGjK
— Led By Donkeys (@ByDonkeys) January 31, 2020

- September 21, 2020
I may have stumbled on a better way to elect MPs: Read it below...  But first let me give you some background. The UK still uses the archaic "first past the post" voting system.  This needs to change.   Back in 2011 there was a referendum on changing this to the Alternative Vote .  We were already living in Spain then, but I followed it closely - the campaigns and the themes . At the end of the day people said.... "It's all too complicated ... we stick with the status quo". What a shame.   Fast forward to 2019 and Boris was able to lie through his teeth campaign with a clear message and get a thumping 80 seat majority - by getting a few more racist old people in the North to vote for him  than would normally do. Ultimately there was a majority of vote for Remain-parties but the way the cookie crumbled down the constituency-lines meant Boris and his team of ultra-right wingers got in. What can be done about this? I been looking at all the plethora of different
Read more