Would Churchill have supported Brexit?

- November 27, 2018
There has been a terrific amount of drivel written about Britain needing to engender some wartime spirit and defeat the enemy during Brexit.

There has been some good commentary in the press for example this extensive research in E-International Relations by Alistair Steward.

There is also, of course some complete horlicks floating around mainly in the Brexiteer press and the comments sections. 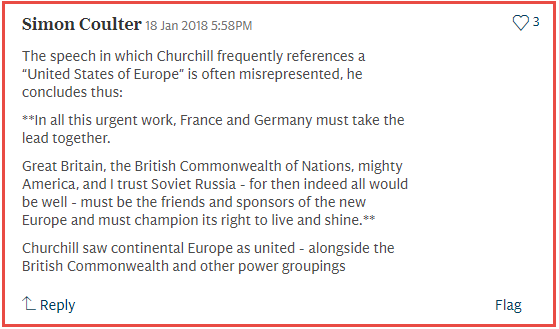 Here another comment from the Telegraph newspaper on this article.

Here Simon Coulter uses the same technique as the first comment - write some genuine text then make up some "analysis".

Churchill may have shifted his opinion over the years, as many do, but after the war he became more in favour of a United States of Europe and all that that entails.

At the first Congress of Europe Churchill said:

..."Mutual aid in the economic field, and 'joint military defence', must both 'inevitably be accompanied step by step with parallel policy of closer political unity"....  "It is said with truth that this involves some sacrifice or merger of national sovereignty.' 1

So there we have it.    I would like to add that I find it incredibly frustrating when I hear Brexiteers cry... "We don't want to be ruled by Germany!"   Do they not understand that for every bit of "ruling" the Germans do of Britain... we are "ruling" them back in equal measure?

Did Churchill see Britain's role in Europe as a "great trading nation with our European friends?"  or did he see some closer union?

For the avoidance of doubt whether Churchill meant to include Britain in the United States of Europe - which some commentators seem to assume he didn't.  Please read the analysis of Churchill's speech from a debate on Foreign Affairs in the House Commons on March 28, 1950 p520

"There could be 'no hope' for a United Europe without Germany, and there was 'no hope' for Germany except within a free and United Europe.  Britain, France and Germany should, by combining together, make the 'core or nucleus upon which all the other civilised democracies of Europe, bound or free, can one day rally and combine'".2

So I hope that settles it.