What do to if your phone is stolen in Andorra

However, you might not.  I was skiing up a Pal (Vallnord) and was using my phone - a lovely shiny Lumia 950 with Dual SIM - about £600 retail - and must have mislaid in the toilets.   Looking back I think I left it on the sinks.

Anyway I got to the car, realised my error - but by the time I got back; it was gone.

I went to the office to report the loss, they have a log book there.  I then drove home.  When I returned I asked my wife to ring the phone - it was ringing, but no-one was picking up.

I'd setup find my phone; so went to the website and this is what I saw. 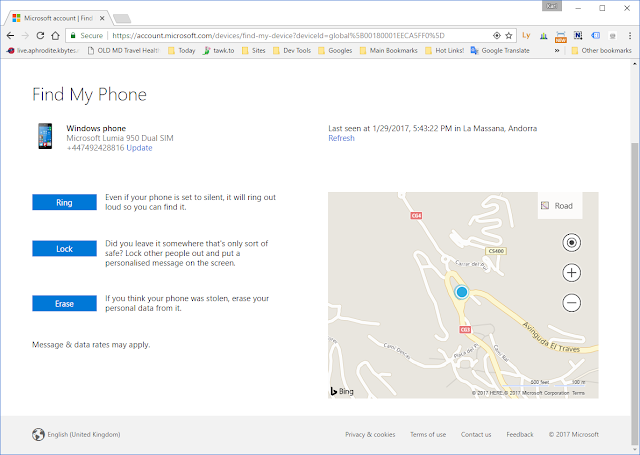 The phone was now at the town-end of the cable car!   I was hopeful that someone had picked it up and was returning it to the office at that end... But then why were they not picking up the phone? 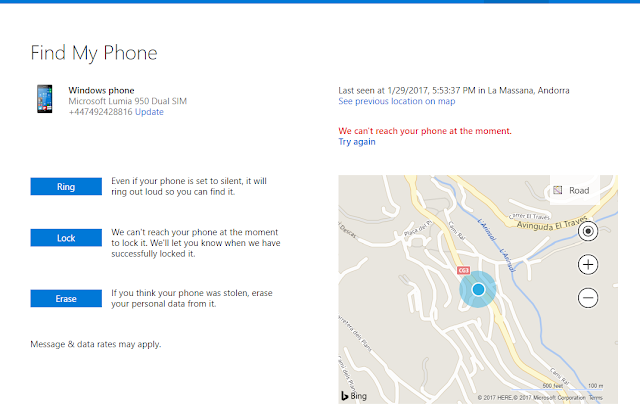 A while later it was further down the road - so that's it.  Someone (probably a spanish youth) has decided the phone is now his.

It had a PIN code on it, but you can turn it off by pressing the buttons - so that's where it went off; near the Credit Andorra bank on the main street in La Massana.

In recent years I normally buy 2nd hand phones;  and very rarely lose my primary phone.  But this one hurts bad.  Not only was it new, and expensive, but it was also a special treat to myself:

During my 20s and 30s I had an endowment policy that was originally used as mortgage payback vehicle - I'd got a new mortgage and started an ISA to pay that back - leaving the endowment policy disconnected; but I'd continue to pay it.  It was about 20 quid a month.   Now during my 20s, a score was a lot of money - easily a good night out - but I saved this money - it had been a sacrifice.   So when it ended at age 45 and payed out around 20K, it is a welcome boost for me at this time as I try to setup my online business, but I also thought I'd treat myself to a new phone.

Here is a little rant video I made when walking into town to report the loss to the police.  More of an aide-memoire to myself not to buy a new phone again, than anything else.

So the sod who nicked it has no concept of what that phone means to me, or the cost over the years.

In Andorra it is simple enough to block the mobile.  You must get a "denunciar" from the Police - like a Police report.

Turn up during working hours to the main police station in Escaldes, walk in and report the loss to one of the clerks.  They will give you a stamped form that you take down to the STA office and they will cancel the SIM; and the phone will not be able to connect to the Andorran network.

But I suspect most likely that it was someone from Spain (it was crawling with tourists that weekend)  - I have a Spanish phone number with the Yoigo operator, as we disappear off to Spain often for weekends and longer breaks.

They have an email address (spanish language only); so I sent off the copy of my Andorra denunciar to them, and crossed by fingers.

All told it took about 2 months all told;  but yippee!  I got an email from Yoigo telling me they'd blocked it and all other operators in Spain (they are all in the same scheme) had been requested to blocked it too.

So this 2 month period is long enough for my light-fingered friend to have got used to his new toy - maybe got all the music download he likes, all the settings just right - and woke up today to find it's dropped off the network - and is now as useful as a brick.  I hope so anyway!!!
andorra phones theft